Young Thug is the subject of Jon Caramanica's New York Times profile, and as usual, he is a man of few words. While it only contains three or four short quotes from the rapper, the piece illustrates Young Thug's daily routine and the genius of his writing process quite well, and when he does get to talking, he's not afraid to answer the hard questions.

The standout quote from the interview comes when the Lil Wayne bus shooting in Atlanta -- an incident which Thug's name has been loosely attached to -- is brought up.

“I got millions to get, I’m not running around shooting no damn bus,” he said, once again enforcing that he and Wayne are not beefing in any way. “I’m not just being lame or trying to do something smooth. I told the whole world you my idol, and whenever you stop I’m gonna keep going... Both of us grew up the same thing, the same gang man — Y.M.C.M.B. Why should you ever in your life even feel like we against each other? 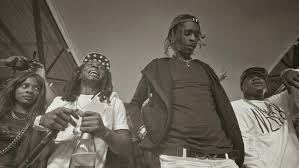 The last we heard from Wayne, he had similar feelings about the "feud". Can we now finally put things to rest?

Read the full piece over at the New York Times.