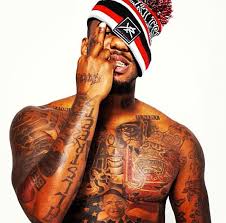 The Game and DJ Skee are old friends, having been the dynamic duo behind the legendary diss track "300 Bars." Both have had very successful careers in very different ways, and The Game stopped by Skee's talk show recently to promote The Documentary 2.

The interview covered a variety of topics and gave many insights about the album, none greater than the fact that The Game apparently recorded 700 or so songs and eventually narrowed it down to 38. He recalled showing Dre 20 tracks and Dre telling him they were all trash.

Game tells us the difference between disc one and two, and notes that Dre said "if I could re-do 'The Chronic', I would make it sound more like disc one."

Game also clarified his various rumored beefs and spoke on the differences between the two discs. He reported that Dre said, "if I could re-do 'The Chronic', I would make it sound more like disc one." Finally he explained his decision to make one disc red and the other blue, a response to the "100 days, 100 nights" of gang violence currently underway in LA. "I want to help unify and break the color lines," he said. "If I can save a life or two, I want to try and do that."